In 2016 it was decided, by mutual consent with the XYL I might add, a new vehicle was deemed to be appropriate as the Volkswagen Caddy had done nearly 100,000 miles and the DSG gearbox is prone to problems of engaging reverse when, like me, it is getting on a bit in years. Another trip to Thorntree's Garage resulted in the much more comfortable Kia Sedona. The extra space and comfort it affords meant that we could run the aging parents around, especially the regular hospital runs!

Like with the VW Caddy, the previous vehicle, I didn't want to drill any holes in the roof (or anywhere else for that matter) and there were no roof bar mounting holes available. However there were two roof rails on the roof (unsurprisingly) and so the search for some inexpensive bars was started.

Those who know me understand my dedication to all bargains eBay style and the search commenced there. I didn't want to spend too much but did want something substantial which would withstand high speeds on the motorway and the Atas 120 HF aerial. A set of lockable bars were identified, purchased, delivered and (eventually) fitted. The instructions were not particularly clear and it took a couple of attempts to get them fitted without working loose or slipping along the roof rails.

Initially I fitted two fixed mountings for the HF and VHF antennas but it became annoying every time I was entering a height restricted area that I had to get out and take them both off. Height restricted locations include Costa Coffee's drive through, McDonald's drive through, the local refuse tip and multi-storey car parks. Then, if I wanted to carry on operating, I had to get out again and refix the aerials before driving away.

I started to consider making a motorized mount from a small 12 volt worm drive motor, a couple of micro switches for the end stops and a biased off ON-OFF-ON toggle switch. I'm obviously not the first person to look to create something like this so I had a look on YouTube to see what similar solutions other amateurs had come up with and in the process I came across the Diamond K9000 motorised mount. The next step was to find a retailer who had a couple of these in stock, with a supplier identified, a pair of them were ordered from Radioworld in the Midlands and when they arrived they were unpacked to see what there was and how I was going to attach them to the roof bars.

As always, the arrival of new toys is a time of juvenile excitement hi hi. The pack has the mount, the two way switch, the motorised unit and the cigar lighter adaptor. As I had two of these I didn't want to have a lot of training wires in the front of the car, getting tangled up whilst driving would be very hazardous. A quick check with the multimeter proved my initial thoughts were correct. The switch simply applies 12 volts to the motor either +ve or -ve to the hot side of the motor depending on which direction is required so a trip to ebay found some lovely biased of double pole double throw switches 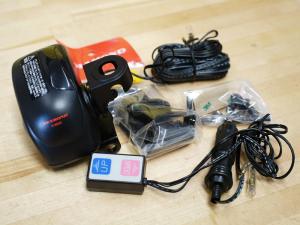 Powering Up (and Down)

The Kia Sedona has a little panel on the dash for some additional switches for optional extras that weren't fitted and I prised it out and mounted the replacement switches on it. the wires were run round to the rear of the car with a  mixture of under carpet or threaded behind the plastic capping and roof lining.

I have an MFJ buck boost supply in the rear of the car which powers the FT857 and gives a constant 13.8 volts at up to 25 amps, I hooked up the antenna mounts to this supply because it keeps all the radio gear running from one source.

The Diamond mounts were fastened to the roof bars with a single bolt to hold them securely. This necessitated a suitable hole to be drilled, bolt inserted and lock nuts added. There is an adjustment slot on the side of the mount, this is to adjust the two end stops. The vertical and the horizontal, the latter being positioned such that the aerial when in the lowered position doesn't impinge on the roof or roof furniture.

The dual band 144 MHz and 432 MHz whip was installed on the nearside and the HF ATAS120 on the off side. This functioned reasonably well but the HF aerial was too big. Whilst it went up and down well, the length meant that the stainless whip fell well over the windscreen. The other difficulty with the antenna was that if it struck an overhanging tree then it overrode the gears. As you can see from the picture of the inside the gears are nylon not metal and would be easy to strip or otherwise get damaged. The ATAS was abandoned for mobile operation and is put on just for portable operation. 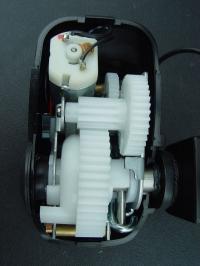 A Moonraker six metre base loaded antenna has replaced the ATAS to allow 50 MHz operation. It picks up the local 6m repeater GB3LP which never seems very strong (about 12 miles) or has any activity.

I have been very pleased with the mounts and not surprised that HF has some difficulties, after all it is a big bulky item and the bottom section (the screwdriver part) is totally solid.. Overall I would highly recommend this mounting for anybody who doesn't want to have a hole drilled in the bodywork (other mountings are available like the hatchback one) but appreciate being able to lower and raise when necessary.